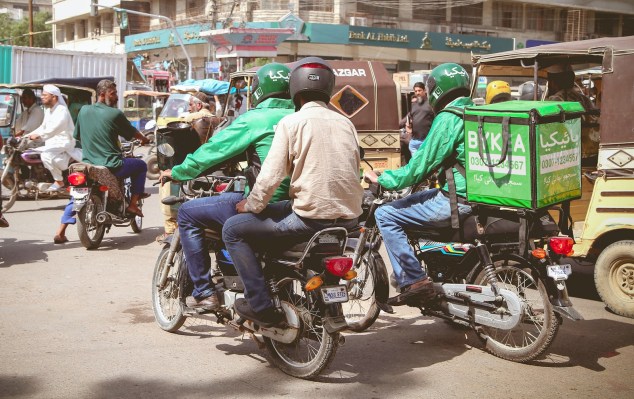 Bykea, which leads the ride-hailing market in Pakistan, has raised $13 million in a new financing round as the five-year-old startup looks to deepen its penetration in the South Asian country and become a “super app.”

The startup’s new financing round, a Series B, was led by storied investment firm Prosus Ventures . It’s the first time Prosus Ventures has invested in a Pakistani startup. Bykea’s existing investors Middle East Venture Partners and Sarmayacar also invested in the round, which brings its total to-date raise to $22 million.

Bykea leads the two-wheeler ride-hailing market in Pakistan, and also operates a logistics delivery business and a financial services business. The startup has partnered with banks to allow customers to pay phone bills and get cash delivered to them, Muneeb Maayr, founder and chief executive of Bykea, told TechCrunch in an interview.

Fahd Beg, chief investment officer at Prosus, said firms like Bykea are helping transform big societal needs like transportation, logistics and payments through a technology-enabled platform in Pakistan. “Bykea has already seen impressive traction in the country and with our investment will be able to execute further on their vision to become Pakistan’s ‘super app,’ ” he said in a statement.

Bykea works with more than 30,000 drivers who operate in Karachi, Rawalpindi and Lahore. (Two-wheelers are more popular in Pakistan. There are about 17 million two-wheeler vehicles on the road in the country today, compared to fewer than 4 million cars.)

The new investment comes at a time when Bykea restores the losses incurred by the coronavirus outbreak. Like several nations, Pakistan enforced a months-long lockdown to curtail the spread of the virus in March.

As with most other startups in travel business globally, this meant bad news for Bykea. Maayr said the startup did not eliminate jobs and instead cut several other expenses to navigate the tough time.

One of those cuts was curtailing the startup’s reliance on Google Maps. Maayr said during the lockdown Bykea built its own mapping navigation system with the help of its drivers. The startup, which was paying Google about $60,000 a month for using Maps, now pays less than a tenth of it, he said.

Starting in August, the startup’s operations have largely recovered, and it is looking to further expand its financial services business, said Maayr, who previously worked for Rocket Internet, helping the giant run fashion e-commerce platform Daraz in the country.

The startup has been able to out-compete firms like Careem and Uber in Pakistan by offering localized solutions. It remains one of the few internet businesses in the country that supports the Urdu language in its app, for instance.

“Our brand is now widely used as a verb for bike taxi and 30-minute deliveries, and the fresh capital allows us to expand our network to solidify our leading position,” he said.

I asked Maayr what he thinks of the opportunities in the three-wheelers category. Auto-rickshaws are some of the most popular mode of transportation in South Asian nations. Maayr said on-boarding those drivers and figuring out unit-economics that works for all the stakeholders remains a challenge in all South Asian nations, so the startup is still figuring it out.

Would he want to take Bykea to neighboring nations? Not anytime soon. Maayr said the opportunity within Pakistan and Bykea’s traction in the nation have convinced him to win the entire local market first.